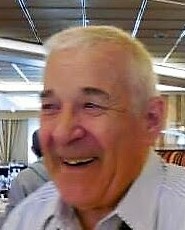 TEMPLETON – Roger W. Sanborn, 81, of 16 Mill Stone Circle, died peacefully at his residence Tuesday morning, January 1, 2019 with his family at his side.

He was born in Plymouth, NH on January 8, 1937, son of the late Earl and Evelyn (Long) Sanborn and grew up in Winchendon.  Roger graduated from Murdock High School and Worcester Trade School.  He was a resident of Gardner for 51 years until moving to Templeton over three years ago.

Roger worked as a sheet metal mechanic and had owned his business, Union Heating and Cooling.  For many years, he worked at Envirocraft in Leominster until his retirement.  He was a fan of New England professional sport teams and enjoyed woodworking, doing home plumbing and wiring and working on other home projects.

Calling hours will be held Saturday from 10 to 11 A.M. preceding the service.

In lieu of flowers, memorial donations may be made to GVNA Hospice, 34 Pearly Lane, Gardner, MA 01440.

Please click here to view the video tribute
To order memorial trees or send flowers to the family in memory of Roger W. Sanborn, please visit our flower store.