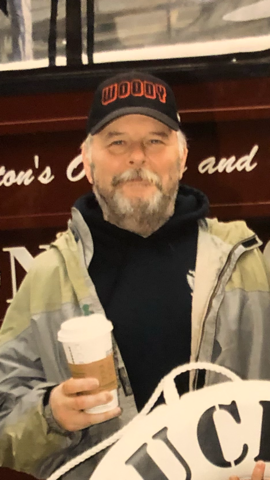 WINCHENDON – Richard A. “Woody” Woodward Jr., 57, of 19 Adams Avenue, died unexpectedly Thursday morning in Heywood Hospital Gardner, with his family at his side.

He was born in Winchendon on September 13, 1962, son of the late Richard A. “Butch” Woodward and Christy A. (Murphy) Woodward and was a 1980 graduate of Murdock High School.  Following his graduation, he entered the United States Army and proudly served his country until his discharge in 1982.

Woody worked for 37 years as a shipper and receiver at New England Woodenware.  He was a member of the Baldwinville American Legion and enjoyed playing pool and working on cars.

Calling hours will be held Saturday from 12 PM to 3 P.M. preceding the funeral.

Burial in the Massachusetts Veterans’ Memorial Cemetery will be at a later date.

In lieu of flowers, memorial donations may be made to Gardner Veterans Outreach Center, 268 Central Street, Gardner, MA 01440.

Please click here to view the video tribute
To order memorial trees or send flowers to the family in memory of Richard A. Woodward Jr., please visit our flower store.