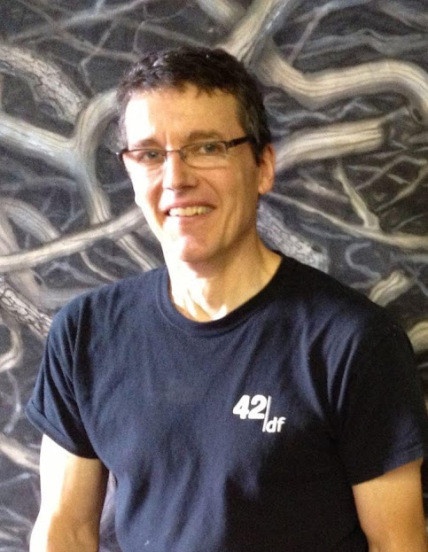 ROYALSTON – Joseph A. “Jack” Kacian, 64, of Deland Road in Royalston, died at home on July 12 with family members by his side.

He lived with Parkinson’s Disease for many years.

He was a talented multi-media artist with a long, varied and stellar career, most recently as co-owner of 42 Design Fab of Indian Orchard, Mass.

Jack was born in Gardner on June 8, 1958, the son of Joseph J. and Stella (Doucette) Kacian. He attended Gardner public schools and graduated from Gardner High School in 1976.

He began his artistic career in his teen-age years, teaching himself illustration and air-brush painting. He launched his professional life air-brushing motorcycles and vans, and he painted graphics and illustrations on many buses for Wilson Bus Line of Templeton.

In the 1980s, he attended the New England School of Art and Design in Boston, excelling in various creative media. He graduated with a degree in graphic design and a concentration in illustration. At graduation, he received awards for Best Illustration and Best Airbrush Artist in his class.

He worked for the Holbek Group in Turners Falls before moving on to become co-owner of 42 Design Fab. These companies specialized in designing and fabricating museum displays, dioramas, and nature center exhibits in many New England locations, as well as props for movie sets. Jack’s talents enabled him to create interactive displays, murals and sculptures large and small.

Jack became a licensed pilot of small aircraft and also developed an interest in model airplanes, becoming increasingly enthusiastic about this field. He entered into competition with his planes which were constructed to scale and powered by rubber bands. His achievements in modeling were written about in Flying Models magazine.

He had musical talent as well, playing lead guitar with friends in a local garage band and on rare occasions did Elvis Presley impersonations.

. In addition, he taught himself carpentry and built his own home in a forested region of Royalston where he lived with his wife of 37 years, Cynthia (Melanson) Kacian, and their daughter Hannah.

While he was widely recognized by his peers for his talent, Jack was notably humble, never bragging about his achievements. He was kind and considerate to everyone. He was loved and respected by his family and friends as well as his fellow artists. Jack had no enemies.

He is survived by his wife and daughter, as well as his brothers and sister – Dennis Kacian of Idaho, Janet Peterson of Ashburnham, Stephen Kacian of Gardner and David Kacian of Gardner – and many nieces, nephews, cousins and friends.

A memorial service in the funeral home will follow at 2 P.M. Thursday.

Memorial donations may be made to the Parkinson’s Foundation, 1255 Soldier’s Field Road, Boston, MA 02135 www.parkinson.org

To order memorial trees or send flowers to the family in memory of Joseph A. "Jack" Kacian, please visit our flower store.