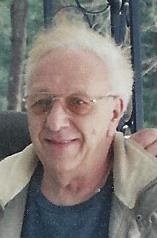 He was born in Gardner on December 10, 1938, son of the late Harold E. and Katherine (Hunt) Moore and was a 1956 graduate of Gardner High School.  He later graduated from Worcester Junior College.

Jim worked for Simplex for 17 years as its assistant traffic manager.  Along with his late father, he had formerly operated the former Whitcomb Travel Agency in Leominster.  He later worked in retail at the Value House in Sanford, Maine and then at Grinnell Fire Protection in Providence, Rhode island.  In recent years, he had worked as a sales representative for 13 years at the former Stanleys Oldsmobile.  He had also worked part time as a funeral assistant for the former Smith Funeral Home.

Graveside services will be held Tuesday, May 9, 2017 at 12 Noon in Green Bower Cemetery.

Memorial donations may be made to Gardner Animal Control, 899 West Broadway, Gardner, MA 01440.

To order memorial trees or send flowers to the family in memory of James H. Moore, please visit our flower store.