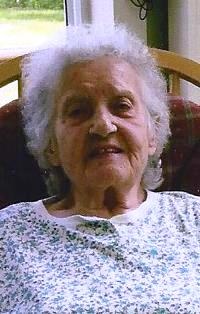 A lifelong resident of Ashburnham, Irene was born on October 31, 1920, daughter of the late Saluste and Cora (Lafreniere) Antil.  Irene  was a 1938 graduate of Cushing Academy.

Irene worked for 26 years as an engraver at Simplex Time recorder until her retirement.  She was a lifelong member of the former St. Annes Church.  Irene enjoyed dancing and traveling to Maine.  Her greatest enjoyment was spending time with her family.

Her husband, Joseph A. Setevdemio, died in 1989.  She leaves two children, Ronald J. Setevdemio and his wife Sylvia of Ashburnham and Nancy Wakefield and her husband Rick of Richardson, TX; four grandchildren, six great grandchildren and a special niece, Gaynel MacManus.  Her brothers, Edmund Antil and Saluste Antil Jr, predeceased her.

Funeral services will be held Thursday, October 13, 2016 at 11 A.M. in Stone-Ladeau Funeral Home, 343 Central Street, Winchendon.  A calling hour will precede the service from 10 to 11 A.M. Thursday.

Burial will be in Calvary Cemetery, Winchendon.

Memorial donations may be made to St. Denis Church, 85 Main Street, Ashburnham, MA 01430.

Please click here to view the video tribute
To order memorial trees or send flowers to the family in memory of Irene P. Setevdemio, please visit our flower store.