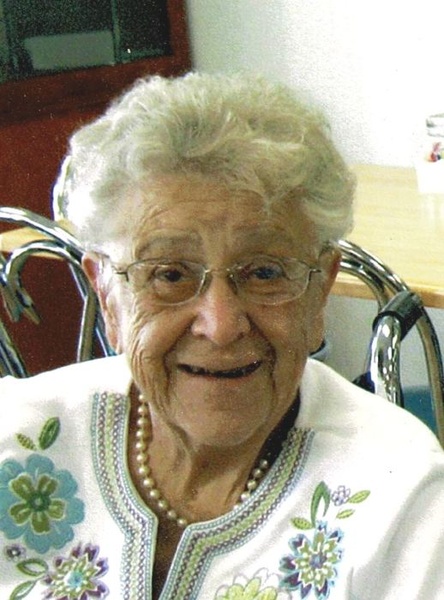 She was born in Jaffrey, NH on March 30, 1921, daughter of the late Edward and Amy (Letourneau) Gobeil and was a proud graduate of Conant High School.  She lived in Winchendon for many years until moving to Worcester nine years ago.

Irene proudly served in the United States Navy during World War Two.  She worked hard all of her life, beginning at the age of twelve.  A factory worker for many years, she retired from Simplex Time Recorder, where she worked for several years.  An animal lover, Irene loved to bowl in her earlier years.  She also enjoyed playing bingo, music and dancing, and making trips to Las Vegas and various casinos.  She was a member of Eugene M. Connor Post 193 American Legion and its Legion Auxiliary and Lt Frederick Wilder White Post 2158 VFW Auxiliary.

Irene was predeceased by two husbands, George A. "Bony" Ward in 1962 and Basilio "Bassie" Santini in 1998.  She leaves a daughter, Cynthia A. Dorval and her husband Brian of Worcester; a grandson Brian C. Dorval Jr of Worcester; a great granddaughter Katelyn Pawlina and several nieces and nephews.  Irene was predeceased by her sisters, Amy, Rita, Adele, Shirley and two sisters, who died at birth.

A calling hour will precede the funeral from 11 AM to Noon Friday preceding the funeral.

Burial, with military honors, will be in the Massachusetts Veterans' Memorial Cemetery.

To order memorial trees or send flowers to the family in memory of Irene A. Santini, please visit our flower store.