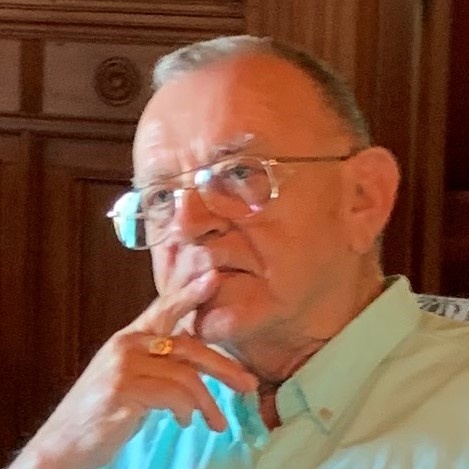 Gregory L. Cardinal, 82, died peacefully on March 3, 2022, under Hospice care at Renaissance Manor on Cabot St., Holyoke, MA.  He was born on Aug. 7, 1939, in Manchester, NH, and was promptly adopted by the late Raymond and Helen (Kleczka) Cardinal.  There he attended parochial schools and then Tilton Academy.  He joined the U.S. Army Reserve Force, and later as a military policeman, in the Regular Army, serving honorably in Korea.

Upon discharge, Greg went back to academe, first to Clark University, and then to UC Berkeley.  He apprenticed in furniture restoration, developing a life-long interest in antiques.  Greg later worked in private industry and for the Massachusetts unemployment office, before starting his own ceramics business.

Retirement enabled Greg to enjoy the life of a snowbird, typically spending warmer months in Winchendon, MA with his wife, Julia (White) Cardinal.  He wintered at his home in Hudson, FL.  While there, he took up volunteer work with the Guardian ad Litem office in Pasco County, serving the 5th Judicial Court.  He was their longest serving volunteer.  He was proud to help children and families, most of whom were struggling with the ravages of substance abuse. He was a member of The Spirit of Life Unitarian-Universalists of Odessa, FL.

In New England, Greg was a past master of Artisan Lodge of Masons.  He was a member of the Winchendon Kiwanis Club, and the Friends of the Beals Memorial Library.  He also volunteered to help prepare the Community Suppers served weekly by the Peterborough Unitarian Universalist Church.  These trips were typically preceded by a visit to the Toadstool’s used book section where he could always find something of interest in the history section.  Greg was a dilettante, enjoying classical music, history, classic films, travel, museums, horticulture, and science--especially historical geology.

Besides his wife, whom he married in 2001, Greg leaves in-laws Willard White and his wife Lee of Athol, M. Winifred Morgan and her husband F. Scott Morgan of Bridgeton, NJ, and Rosemary E. White of Haddonfield, NJ; five nieces and nephews and two grand nieces, along with the descendants of the cousins who preceded him in death:  Betty (Kleczka) Lapierre of Greenfield, Barbara (Kleczka) Migliozzi of Westborough, and Donald W. Kleczka of Worcester, MA.  All were loved by Aunt Marion B. Kleczka, who died in 2003.

In lieu of flowers, memorial contributions may be sent to the Winchendon Fire Department, 405 Central St., Winchendon, MA 01475 or a charity of the donor’s choosing.

To order memorial trees or send flowers to the family in memory of Gregory L. Cardinal, please visit our flower store.