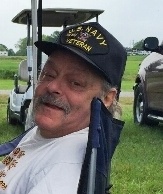 He was born in Winchendon on September 16, 1952, son of the late Dario and Sally (Ackert) Uguccioni and grew up in Winchendon.  Butch attended Murdock High School and later served in the United States Navy.  For the last 8 years, he lived in Opp, Alabama, after living for periods of time in Florida.

Butch had been employed as an electrician.  He enjoyed chess, crossword puzzles and playing the drums in earlier years.  Many years ago, Butch was a drummer for "The Continentals" and he once appeared on the television show "Community Auditions."  He was a loved watching "The Three Stooges."

A memorial service will be held Friday September 22, 2017 at 2 P.M. in Stone-Ladeau Funeral Home, 343 Central Street, Winchendon.  A calling hour will precede the service from Friday, September 22nd from 1 to 2 P.M. preceding the service.

Please click here to view the video tribute
To order memorial trees or send flowers to the family in memory of Dario A. "Butch" Uguccioni, please visit our flower store.