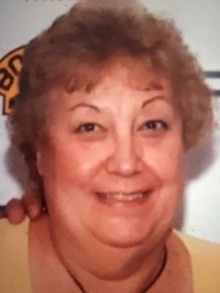 Carol A. (Carrier) Fournier, of Bridgewater age 75, died peacefully but unexpectedly on March 21.

Carol was the loving daughter of the late Adrian and Yvonne (Roberts) Carrier and grew up in Winchendon Mass. Carol started working at an early age and while out with friends met a young man who was in Navy named Maurice Fournier, after a brief courtship the two would marry on August 1st , 1964. When Maurice returned from his tour they moved to Quincy in 1969 before settling in East Bridgewater in 1974 where they raised their children. Carol, always a devoted homemaker, also had a lengthy career with the Foxboro Company where she worked for 30 years. In her younger years Carol loved being active with her children but also was a valuable member of St. John’s Church in East Bridgewater. When the children were older she and Maurice took the best trip of their lives to Disney World, they enjoyed every minute of it. The two of them always loved a good adventure; whether it was bringing the whole family to Cooperstown or Niagara Falls or with just Maurice to have lunch near an awesome lighthouse like in Portland. Her home was always filled with music, typically country, and her funny yet tough personality made her a hoot to be with. She was stubborn to a tee yet endearing, loving, kind, and fun. Everyone loved her and she will be greatly missed.

Carol was the loving wife of Maurice M. Fournier of Bridgewater and devoted mother of Scott A. Fournier and his wife of East Bridgewater, James R. Fournier of TX, and Derek B. Fournier of Brockton. Loving “Grammy” of Riley, Elizabeth, Zachary, Joshua, Kristina, Andrea, and Hannah. Loving sister of Norman, Marshall, Gloria and Paul all of Winchendon, and the late Annette, Roger, and Tina. Also, survived by many loving relatives and friends.

Due to COVID-19 all services for Carol will be private. In lieu of flowers donations may be sent to the ALS Association.

To order memorial trees or send flowers to the family in memory of Carol A. Fournier, please visit our flower store.