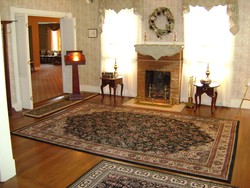 Founded in 1875, the Stone-Ladeau Funeral Home is one of the oldest existing funeral homes in North Central Massachusetts. Opened up as a store front business, back in the days of horses and buggies when people had funerals in their residences, this business has remained family operated through all its years of operation. For many years, this funeral home operated as the Snow Funeral Home, under the direction of Charles Snow and then his son, Richard Snow. F. Richard Ladeau joined the firm in 1958 and ran the business for many years after the retirement of Dick Snow. On the occasion of the 100th anniversary of the funeral home in 1975, the name was changed to the Snow-Ladeau Funeral Home. In 2007, Douglas M. Stone took over the reigns, in a smooth transition. In 2009, the name of the funeral home was legally changed to Stone-Ladeau Funeral Home to better reflect the name of Doug Stone.

In 2018, Stone-Ladeau Funeral Home bought the good will and phone number of the former Fletcher-Hebert Funeral Home in Winchendon.  From the beginning of our existence right up through the present, we treat every family with understanding, respect and in a dignified and courteous manner.

Early in April 2022 Doug transitioned the business to Kevin Mack of Mack Family Funeral Homes.  Doug and Kevin have had a great working relationship for many years and the transition has been seamless.  In addition to Kevin, Funeral Director Walter C. Taylor, who now resides over the funeral home, will be an active caregiver along with Doug and Kevin.

Now 147 years old, our funeral home treats every family the old fashioned way, with honesty and integrity our cornerstone from the very beginning up to the present. Our philosophy is to treat each family, as we would wish to be treated ourselves. We pledge to earn your confidence and trust through hard work, fair prices and wonderful service.